Today we faced Delhi ourselves. When I woke up this morning I didn’t want to leave the safety of the hotel. Delhi is scary. But we planned our day with the help of Mandys itinerary and off we went. We walked around 10 miles today and saw lots of sights notably the India gate and the lotus temple (more importantly we also found out India has Nandos) to get around we caught the Delhi metro which is really easy similar to the tube. Women have their own carriage here, we can board any carriage but men cannot board the women only one. The women only carriage is amazing but it’s really sad that it is needed so that women have a safe place. For dinner we had an Indian pizza hut which was great.

We’ve come back to the hotel now and I’ve done a massive repack ready for the flight to Kuala Lumpur tomorrow evening! India you have been so much more than I ever could have imagined or hoped for! 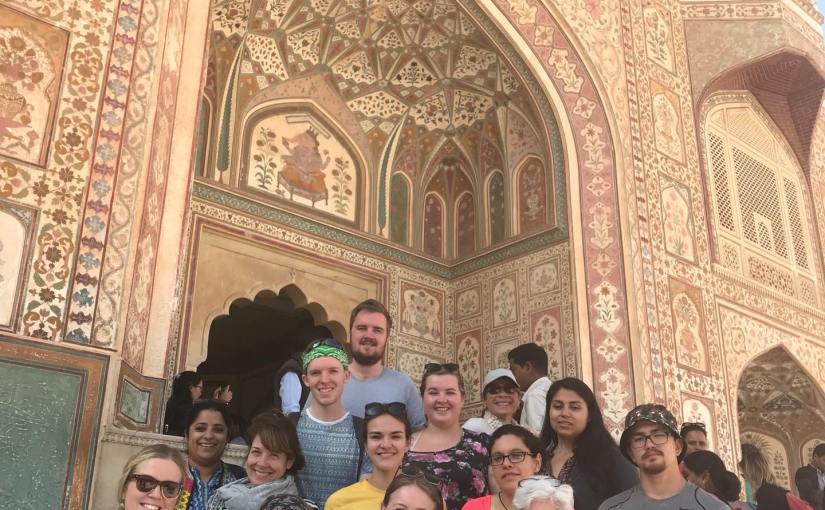 Our final journey together as a group today was the 7 hour bus ride back to Delhi. We left Jaipur Inn at 10am and arrived at the hotel in Delhi at around 4.45pm. We had a stop for lunch where I had possibly my last vegetable thali *cries*.

After arriving back at the hotel we took the Delhi metro (for the first time) as a group to Connaught Place which is where the British had their office when they occupied India. The buildings looked very British. Whilst we were here we saw Indian H&M and various other brands we recognised.

The shops for rent in connaught place are very expensive and so most of the smaller Indian shops were in the Palika Bazaar. Palika is completely underground and is like a shopping centre but the very opposite to a British shopping centre. We didn’t get to browse freely and the shop workers tried very hard to get you into shops.

Tonight’s dinner was at Nizams and Mandy recommended the rolls, i had a chicken and egg roll (the roll part was a roti which is similar to a naan) and it was amazing. We came back to the hotel after this and said our goodbyes which was really sad. Truly don’t think we could have got a better group to start our adventure with!